TO BE UPDATE: this documentation still referes to the alpha version

Lifecycle of the topology and internal scheduling

Lifecycle of the topology

The central component in any simulation is the Topology, responsible for managing, among others, the nodes, the links, and time scheduling in the network. As such, each topology manages a timer called the Clock, which fires periodically and activates the various components of the system in a sequential order (see Notification order below).

Topologies can be created in a running state or in a stopped state, whether one wants the Clock itself to be running or not. By default (new Topology()), it is created in a running state, meaning that the simulation begins right after the creation of the topology. This behavior is appropriate most of the time. However, in some cases, one prefers setting up the entire configuration before the execution begins. This is the case, in particular, if the nodes (and/or links) are added by program during the initialization phase. In this case, indeed, we do not want the nodes to start executing before initialization is complete. This behavior can be achieved using a false argument in the topology constructor, then calling start manually once everything is set.

Once running, the topology can be paused and resumed through the pause() and resume() methods. In case these primitives need to be called from different places, possibly being unaware of each other, the calls will be consistently stacked, as illustrated on the side Diagram (credit to Sébastien Tixeuil for this idea).

Every firing of the clock defines a round, in which the hand is given to various components sequentially: 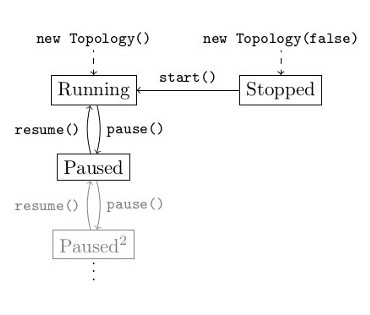